The world is facing increasingly complex and uncertain problems. What can science offer to policymakers and how can the advice be improved?

Drinks and networking from 6-7pm. Panel from 7-8pm.

A panel from SAPEA (Science Advice for Policy by European Academies) will discuss their recent report ‘Making sense of science for policy under conditions of complexity and uncertainty’ addressing the question of how to provide good science advice to policymakers. The panel includes: 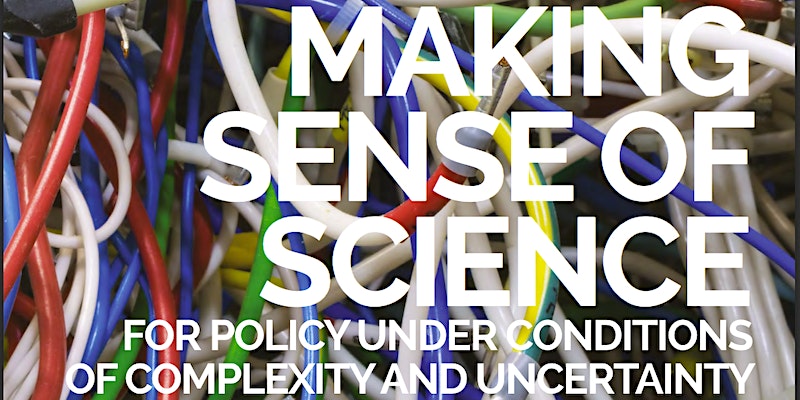 At a time of extreme global challenges, science advice is consistently regarded as a vital element in the overall set of evidence considered by policymakers. Science (defined broadly to include the social sciences and humanities) can support effective policymaking by offering the best available knowledge to understand a specific problem, generate and evaluate policy options, and provide meaning to the discussion around critical topics within society. Policymakers are invariably endeavouring to make sense of scientific evidence that is complex, multifaceted and often at the very limits of what is known scientifically.

It is against this backdrop that the European Group of Chief Scientific Advisers has addressed the question of how to provide good science advice to policymakers. The Group asked the consortium of academies, SAPEA (Science Advice for Policy by European Academies), to undertake a comprehensive and far-reaching evidence review. Members of SAPEA will present and discuss the key findings of their evidence review report, Making sense of science for policy under conditions of complexity and uncertainty. The SAPEA published report covers three main areas: what science can offer to policymaking; using scientific evidence; and the potential for improving the use of scientific advice for policymaking. The panel will present and discuss the main insights of the report.

Many of us wonder where to live in the upcoming 10-20 years. There are so many opportunities around the world for us; travelling and moving was never so easy. Today, England may be our home, tomorrow it might be Japan and in 5 years the US. Recently, there have been many innovative ideas in trying to solve these megaproblems. Advanced technologies together with smart policy-making will be the key in solving these issues.

Dr. Yin Jin is a the director of the Martin Center at the University of Cambridge. Ying Jin will use his current work for the long term planning of Cambridge city region as an example to discuss how to foresee the growth and change of cities, and why it is particularly important to understand societal and technological trends today in designing cities

C. J. Lim is a Professor of Architecture and Urbanism at the University College London. His work addresses what the spatial and phenomenological implications are when sustainable design is applied to a city and the role that citizens play in the production of a relevant social space.

Emergence of health crises and outbreaks of infectious disease are a global issue. Mitigation of these crises requires rapid and interdisciplinary solutions. Come and hear about policy making in health crises from our invited experts in the field.

Elizabeth Surkovic – the Head of Policy, Resilience and Emerging Technologies at the Royal Society. She has worked as a Deputy Director for Science at the Government Office for Science working at the Scientific Advisory Group for Emergencies during the Ebola and Zika outbreaks and developed worked on “Emergency Behaviours” during her CSaP Fellowship.

Dr Jane Greatorex – Team leader in Sierra Leone during the Ebola outbreak in 2015 and Honorary Scientist at Public Health England. She is also the Director of Studies in Pre-Clinical Medical and Veterinary Sciences at Lucy Cavendish College. Dr Greatorex has had a long career in academic and clinical science, and remains on the list of scientists that may be called upon to respond in the event of a health crisis. Recent technological developments, especially in the field of machine learning, robotics, and A.I. have both wiped out entire sectors and created demand for new skills. There is considerable evidence that the technological change observed over the course of the last century has created more jobs than it made redundant and that it has favoured high-rather than low-skilled jobs. Voices claiming that this technological change led to mass unemployment have been proven largely wrong.

But at the dawn of a new major technological shift, it is legitimate to revisit these questions and conclusions. Is the automation of labour as we might see it in the next few years fundamentally different? If almost all jobs that neither require a college degree nor advanced social skills were replaced by robots and sophisticated algorithms within the next two decades, what would human labour look like? How do we need to adapt our social organisation and tax system? And does this transformation make a Universal Basic Income inevitable?

Dr. Malcolm Torry, Director of the Citizen’s Income Trust and honorary research fellow in the Social Policy Department at the LSE. From 1980 to 2014 he served in full-time posts in the Church of England’s ministry. Since 2014 he has given most of his time to the debate on a Citizen’s or Basic Income and is the author of many books about this topic. His London School of Economics (LSE) webpage is here.